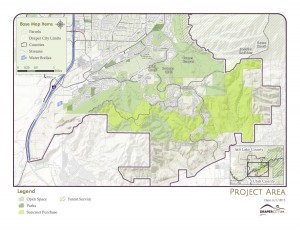 The City is updating the Corner Canyon Regional Park Master Plan to include all City open space along the Traverse Mountains. The “Project Map” above shows land Draper City already owned (light green) and land purchased at ~$2,125 an acre from Zions bank (lime green). The other image is future development.

When the City purchased land from Zions Bank in 2012, then Mayor and City Council reiterated their intent was to preserve as much of the land as open space, but mentioned they would look for ways to recoup the costs of the purchase.

Since the Zions purchase, Draper City has surplussed (surplus is a formality the City follows for land they usually intend to sell) 160 acres of the ~2,400 acres.

Of the current surplussed property, residents have seen some areas progress towards development. [See: Mercer Mountain Estates] This particular parcel, along with 20 acres surplussed in 2014 was included to help facilitate a settlement between David Mast and Draper City.

Regarding the 40 acres of City owned land, City Planner David Dobbins explained  “Draper City purchased nearly 2,400 acres of property from Zions Bank at a cost of $5,100,000, or $2,125 per acre. Therefore, the cost to Draper City to acquire the 40 acres being considered as a settlement with DJI was $85,000. The 40 acres to be developed represents 1.66% of the property purchased by Draper City from Zions Bank.” The Council voted in March 4-1 to move forward with the settlement with SunCrest resident Bill Colbert being the lone vote.

This particular parcel of prime land offers magnificent views of Salt Lake County, Mt. Timpanogos, and Utah County. When asked about what other areas were considered, the City said it considered “many other areas but couldn’t come to an agreement.” Most of the City Council is also quick to point out that the original master plan included more development.

As former City owned land is being developed, many residents are eager to see the City work towards a master open space plan and hopefully “put to bed” the uncertainty of (more) future developments.

Residents are encouraged to get involved by attending planning and council meetings or by following online at planwebsite.com

Related Articles
SunCrest Development Concept Plans | Mercer Mountain Estates & Lone Peak Canyon Tonight, Draper City Council will review a proposed amendment to the master development agreement for Hidden Canyon Estates, Mercer Mountain Estates and Lakeview Heights Properties. Although these concept plans (located adjacent to existing Hidden Canyon Estates development) are not the official, final plats for the development, they do provide SunCrest area residents with the first […]
SunCrest Development SunCrest Shoebox Neighborhood Meeting SunCrest Shoebox Neighborhood Meeting On Monday August 14th from 6:30-7:30PM at the SunCrest Clubhouse, the owners of the ~84 acres known as the “Shoebox” parcel located East of Tallwoods and West of Eagle Crest subdivisions in SunCrest will be holding a neighborhood meeting to review their upcoming proposals for the SunCrest area land. There will […]
SunCrest News SunCrest Open Space Discussion & Edelweiss HOA Annexation SunCrest Open Space Discussion Draper City Council will be discussing the boundaries of a potential conversation easement for SunCrest area land (aka SunCrest open space.) This discussion will be held during their “study session” and is open to the public. However, no public comment will be allowed at the session.  Background: In June, Draper City sold 110 […]