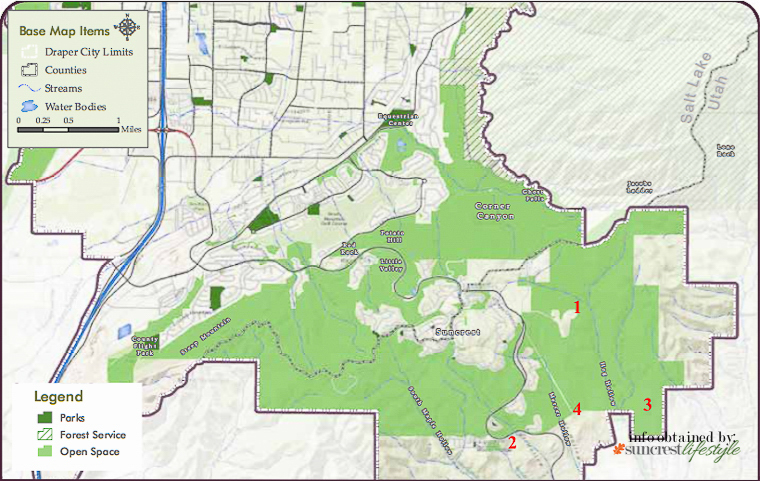 There’s a lot of hubbub regarding the future of SunCrest right now. As many know, the original SunCrest developer declared bankruptcy, a few potential purchases didn’t materialize, and Draper City was able to purchase about 2,400 acres for $5.6M exactly 4 years ago. This, along with the failed development, effectively nixed the original master plan that had been approved, and has given the City an opportunity to set forth their own vision for the area.

In 2015, Draper City put the wheels in motion to develop an “Open Space Master Plan.” With the help of outside consultants, countless hours of input, open houses, and surveys, this plan was adopted early 2016 to serve as an “open space element of the general plan.”

As part of their overall plan, a few parcels are being sold for development, and Draper City will soon hold another meeting regarding the surplus (sale) of additional SunCrest land. With development on the horizon, we thought we’d take a look at the history of other surplus land, and their status today since being purchased.

1- Mercer Mountain Estates
This ~20 acre parcel neighbors Hidden Canyon Estates and will provide pristine mountain and city views. This particular parcel was used to facilitate a settlement between the City and a private owner.

2-Lakeview Heights
This ~20 acre parcel neighbors the current Maple Hollow subdivision and zoning allows for multiunit density. This too was used to facilitate a settlement between the City and private owner.

4- December 2016 Surplus Proposal
Draper is currently considering a surplus of an additional 30-40 acres located along the road leading into the Blue Bison Development parcel.

As more SunCrest land is being sold, open space plans put into place, new trails made, and the Hidden Canyon Estates and Edelweiss subdivisions bring new a wave of new construction not seen since the “boom” of the 2000’s, it’s certainly a busy time up here. Whether you’re new or old to SunCrest, for or against development, an avid outdoor enthusiast or homebody, we encourage voicing your comments, concerns and compliments when change is presented. Collectively, we’re a passionate group and that’s what makes this neighborhood such a unique and diverse community.

Our SunCrest Market Update is a hyper-local analysis of the most up-to-date information regarding the SunCrest real estate market.  The previous month’s SunCrest housing information and future editions are released monthly.